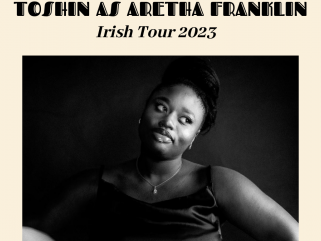 Off the back of sold out shows at The Sugar Club in Dublin, Cork Jazz  Festival and an incredible performance at All Together Now Festival,  much loved Irish RnB/Soul star Toshín is take her Aretha Franklin show  on the road around Ireland, a true tribute to one of her all time musical  heroes.

"Aretha has made a big mark on my music. Her lyrics have not only  inspired me but also guided me through everyday life. I have always  aspired to be just like Aretha. Watching Respect, the movie over and over,  further confirmed the love I have for her and gave me the confidence to  pay tribute to this queen"

Toshín believes the show will really lift the spirits of both Aretha and non  Aretha fans, and won't just be a typical tribute gig, Toshín will be giving  an expertly tuned mixture of Aretha’s hits combined with the full Toshín  live band show experience!