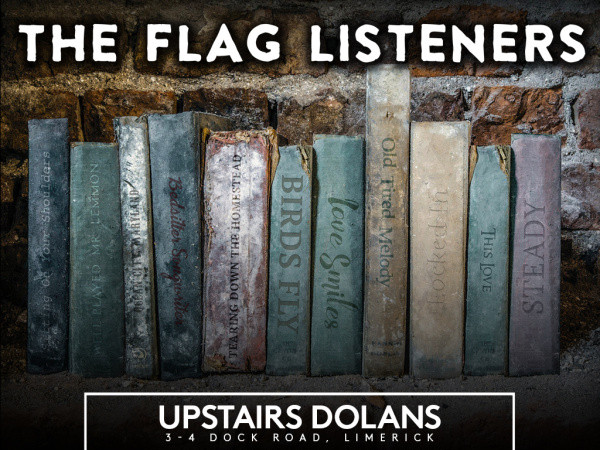 
In late 2021, the band released their latest single, The Wrong America, accompanied by a video by John Steele.

In 2017 the band released their long-awaited debut album, and other short stories, to a packed house in Dolan’s Warehouse, Limerick. Hot Press magazine’s Stuart Clark gave the album a glowing review, calling it a “songwriting masterclass from Limerick’s finest”.


The band is currently recording tracks for the follow-up record. The gig will feature some of these new songs plus familiar tracks from the album, and other favourites from the live set.


The Flag Listeners have a reputation for delivering a dynamic, high-energy live set with sounds ranging from melodic pop-rock, ambient atmospherics to full-on rock’n’roll.

Eamonn Hehir released two solo albums: “Blood Mill Road” (2000) and “The Flag Listeners” (2012). Hot Press described the latter album as “…a heady mix of guitar pop, dreamy soundscapes and poetic lyrics…” The Flag Listeners were formed to play music from these solo albums, but rapidly outgrew that brief, developing a distinct band sound that reflects the members’ individual and shared influences, with fans citing Bowie, The Psychedelic Furs, Elbow, Prefab Sprout and Pink Floyd among others, and John Steele contributing to the songwriting.