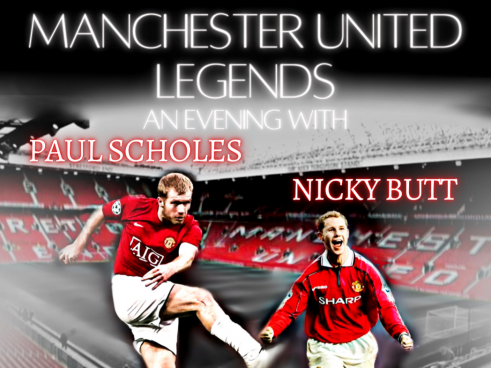 The ultimate night for football fans of all ages. Sit back, relax and spend an evening with Sporting Royalty as they give a rare insight and share stories from their illustrious career’s with Manchester United.


The evening will be packed with laughter and entertainment. Relive stories from their meteoric rise as part of the iconic Class Of 92. Dressing room tales from the Alex Ferguson era, and find out what it was like to play alongside Cantona, Keane, Beckham and Ronaldo…. And of course, how it really felt as local Manchester born lads to make history, and win the ‘Iconic TREBLE’.


Paul Scholes made more than 700 appearances and is one of British football’s most decorated players. A 2022 inductee into the Premier League Hall of Fame, he is widely regarded as one of the best midfielders of his generation and one of the greatest Manchester United players of all time.


Nicky Butt made over 400 appearances for Manchester United winning 15 major trophies in that time including 6 Premier League titles, 3 FA Cups and 1 Champions League. Following a spell at Newcastle United He returned to Old Trafford in 2012 spending 10 years working as a coach and Head of First Team Development.


The evening will be hosted by Manchester born Ashley Crowe and will include Q&A from both host and audience, and the chance for sports fans to meet the former Red Devils.

“You rarely come across the complete footballer, but Scholes is as close to it as you can get”

“If you are going to war, you take Nicky Butt”