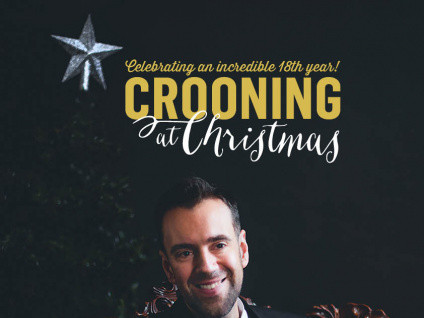 Liam O’Brien’s holiday celebration of the swing era, Crooning at Christmas has been one of Limerick's favourite nights out during the city's festive season for nearly two decades and, for the first time since the pandemic, it is back with a full capacity show at its long-time home at Dolan’s Warehouse!

The show, which sells out annually returns on Friday December 23rd for one night only, so advance booking is essential.

The former Emmerdale star and renowned singer and actor pours his heart and considerable talents into the much-loved show each year, enlisting a superb supporting cast to aid him.

Liam is one of Ireland's leading exponents of the classic crooning style - inspired by his West End leading role playing Dean Martin in "The Rat Pack - Live from Las Vegas" which toured the UK, Europe and right across America.

He regularly performs across Ireland with his own Million Dollar Swing Band and various Big Bands in the UK. He has sung at the prestigious Roundhouse in London and a packed to the rafters Royal Albert Hall for ‘Carols with the Stars’.

Crooning at Christmas features classic songs such as Baby It’s Cold Outside, White Christmas, Let It Snow and Have Yourself a Merry Little Christmas along with newer tunes by artists such as Harry Connick Jr and Michael Bublé.

A host of special guests each year includes new and established artists and has been a showcase for the best of Limerick’s musical talent since 2004.

Returning this year for the first time since 2019 is Brian McCann. A veteran of the West End stage, Brian has played leading roles in The Phantom of the Opera, We Will Rock You, Wicked, Jesus Christ Superstar and many more. In recent years he has toured worldwide with his male vocal group Unity.

Tickets are priced at €24 (plus booking fee) and are on sale via our website.

Liam has also raised vital funds for Limerick’s Christmas Poor Campaign every year at the show, having raised over €15000 to date.