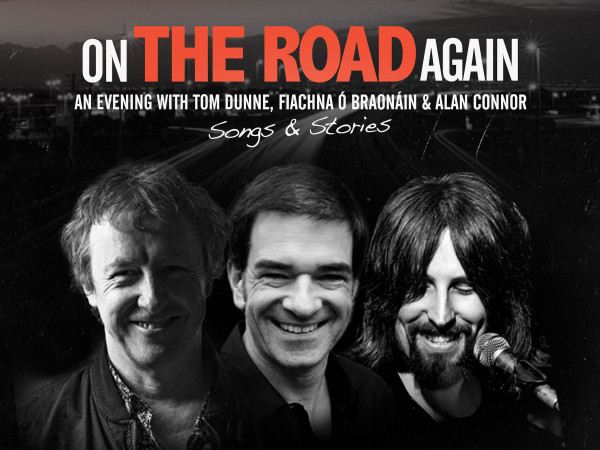 On The Road Again

Following the trios first instant sell out show which received rave reviews - On The Road Again: An Evening With Fiachna Ó Braonáin, Tom Dunne & Alan Connor returns with dates in Cyprus Avenue Cork on 24th September, Dolans, Limerick on 20th October and Pavilion Theatre, Dun Laoghaire on 22nd October.
"On The Road Again" promises to be a fun evening of songs and stories as Fiachna Ó Braonáin, Tom Dunne & Alan Connor hit the road together for the very first time!
Despite having shared stages across the world over several decades, Tom Dunne of Something Happens and Fiachna Ó Braonáin of Hothouse Flowers had never actually performed together until they were invited to do so on RTE Radio 1’s Ray Darcy show where they performed a Christy Moore song, “John O Dreams” and a Willie Nelson song, “On The Road Again”. Ray D’Arcy loved it, Fiachna Ó Braonáin and Tom Dunne had a ball... and were joking they should do more of it! Or perhaps… only half-joking!
Since then several coffees were had and they decided to make it happen! Their respective bands were from different musical worlds but Tom Dunne and Fiachna Ó Braonáin were always united by a love of performance and songwriting and were very taken with what those different schools of thought could bring to their coffee table. Since then they have been working on what songs they could perform together including some new songs neither have performed publicly before.

Multi Instrumentalist Alan Connor was then drafted in to add some Piano, Guitar and Percussion to the dynamic duo! Alan Connor  has toured with Sharon Shannon for over ten years and regularly performs with Something Happens and Frances Black. He is also a member of RTE's "The Late Late Show" House Band since 2021.