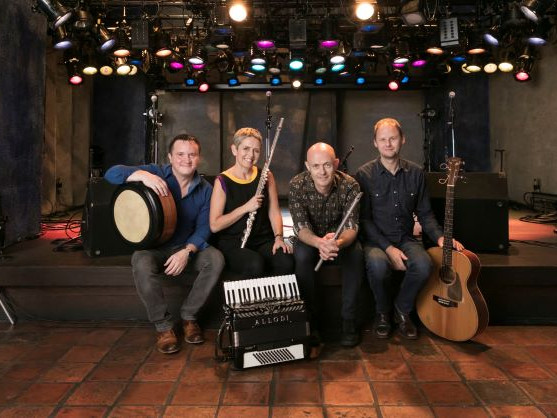 FLOOK Taking inspiration from their roots in the Irish and English traditions, Flook have an enviable trademark sound, weaving and spinning traditionally rooted tunes over precise acoustic grooves, with a rare blend of fiery technical brilliance, delicate ensemble interaction and a bold, adventurous musical imagination. There is certainly no shortage of virtuosity amongst the members of Flook, but the unique impact of this band stems from the wholly intuitive, almost symbiotic, exchange between the various flutes, frets and skins.

More than twenty five years after their first gig together, Flook continue to inspire and enchant audiences of all ages. Their most recent album ‘Ancora’, released in 2019 to critical acclaim and nominated for BBC Folk Album of the year, clearly demonstrates that, with their roots firmly anchored in the tradition, Flook still hold fast to their reputation as major musical innovators.

Flook were shortlisted for Best Folk Group in Ireland’s RTÉ Radio 1 Folk Awards 2019.
“Tour de force return after decade and a half – a luminous reunion ****” – The Irish Times
“Flook’s role and influence in the exploding excellence of instrumental folk music of various persuasions on these islands shouldn’t be underestimated… as vital as ever … Class is indeed permanent” fRoots
“Virtuoso playing abounds … the most creative bodhran player on the planet … superb technique plus a genuine feel and some stonking tunes is a powerful recipe” – MOJO
“Flook are back with a bang, and better than ever – a very welcome return from one of folk’s finest bands” – Irish Music Magazine
“Nothing short of transcendent… No other band sound like Flook and the new material has pushed them to new, exhilarating heights.” Songlines - Live review - June 2019
“Iconic, ground-breaking, progressive and all-round brilliant” – Lynette Fay, BBC Radio Ulster
“Four brilliant musicians. Four times as much brilliant music” – Time Out