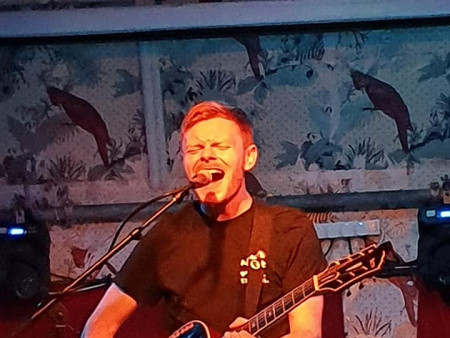 Each Ticket admits 4 per Pod

All Pods must arrive together 15 Minutes Before showtime.

“A Glorious Ruction” is an album like no other, telling a story of self-doubt and
uncertainty set upon the banks of the River Shannon, the course of which splits Limerick City
in two. The album is an interactive art piece in which each song is timed to a specific walk
around the city centre, using the landscape and landmarks of the river as an aural canvas.
Over two nights in late 2020, a select number of fans of the band had the opportunity
to experience this work with the walk at an interactive pre-listening event, with both nights
selling out instantly. One attendee described the experience as “like having a piece of art
made just for you as you walked along, something like that makes you look at things with
fresher eyes doesn’t it?”.
Limerick’s indie rock outfit Anna’s Anchor (aka Marty Ryan) returns to the forefront
once again with the release of this unique concept album entitled “A Glorious Ruction”, due
for release on the 9

th of April 2021 via the hometown label of Out On A Limb Records. It’s
evident that fans are eagerly awaiting the release of this third studio album, buying up over
half the run of vinyl in the first day of pre-orders alone, a proud achievement for the Limerick
musician who has toured with acts like Aaron West, Sean McGowan & Turnover.
Purchase on vinyl at: www.annasanchor.bandcamp.com
“Ryan has recorded a classy album that perfectly marries his passions whilst wrestling with his personal demons
and frustrations” - Golden Plec
“You would have to have a heart of stone to dislike Anna’s Anchor” - Already Heard
“This album is already shaping up to be one of the years highlights” - Strange Brew