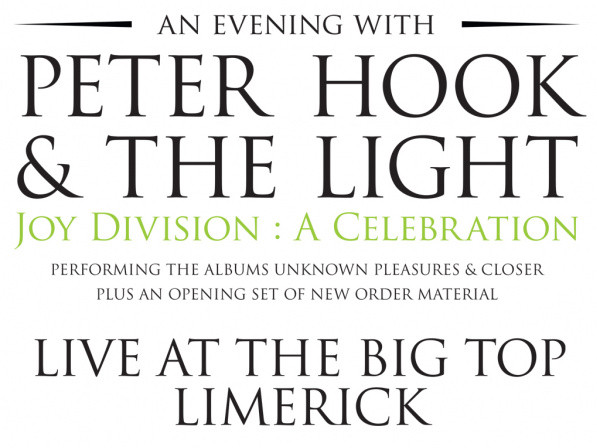 PETER HOOK AND THE LIGHT

Commemorating over four decades of the group’s and Ian Curtis’ continuing influence, Peter Hook & The Light are to come to Ireland for three special dates performing “Joy Division : A Celebration” across Limerick, Dublin and Belfast in November 2022.

Playing both celebrated Joy Division albums “Unknown Pleasures” and “Closer” in full plus singles and B sides along with an opening set of New Order material, the concerts begin at Limerick’s Big Top Thurs 10th Nov ’22 with the second night coming at Dublin’s Olympia Theatre on the Friday before the band wind up the trio of gigs Sat 12th Nov ’22, returning to The Limelight, Belfast.

These Joy Division album shows have become much less common for The Light as they move through their progression of touring the New Order albums in succession since 2012. Aside from some one-off gigs such as The Roxy in LA, Camden Roundhouse and Manchester Academy, this set of concerts is the first Irish shows to be announced for this set in many years.

In addition to coming over 40 years since Joy Division ended, these gigs also mark over a decade of concerts for The Light since they began at The Factory in Manchester in May 2010. That journey has seen them now perform eleven of both Hooky’s bands’ albums all round the world including numerous tours of North and South America, Australia, New Zealand and the Far East.
The influence of Joy Division and their music remains strong in popular culture, holding a sincere reverence. The albums are played sequentially in track order, respecting the inspiration and impact of the stunning debut album “Unknown Pleasures” and the immaculately produced second “Closer”.
“Unknown Pleasures” features “Disorder”, “Insight”, “New Dawn Fades”, and “She’s Lost Control” while “Closer”, considered “a start to finish masterpiece” by Pitchfork Media counts “Atrocity Exhibition”, “Heart And Soul” and “Twenty Four Hours” amongst its many highlights.

In addition to the albums, the November 2022 Ireland dates will span the entirety of Joy Division’s rich but short career including early Warsaw material, tracks from the compilation LP “Still” to the final songs “Ceremony” and “In a Lonely Place” written by Joy Division which were to form New Order’s first single.

On “Unknown Pleasures” – The Album (NME)

The band’s debut ‘Unknown Pleasures’ is simply one of the best records ever made, and is still powerful enough to floor you 30 years on. With an almost dub-like, spacey atmosphere sculpted by studio genius Martin Hannett, the band’s sound was almost the polar opposite of the punk music which had brought them together after a Sex Pistols show in 1976. 10/10


On “Closer” – The Album (Pitchfork Media)


"Closer is even more austere, more claustrophobic, more inventive, more beautiful, and more haunting than its predecessor. It's also Joy Division's start-to-finish masterpiece, a flawless encapsulation of everything the group sought to achieve" 10 / 10.

For all links check peterhookandthelight.live


On Peter Hook And The Light Live

"In the two-and-a-half hours Peter Hook & The Light were on stage, it was hard to fathom how many hits New Order and Joy Division had. Just within the first hour, there were enough songs that some artists today wish they could both write and have in their arsenal. That is what great chemistry in a band does." Huffington Post

"Hooky has done this. His tours are for the fans, and his fans flock to him. Every person standing in the Tivoli has been affected somehow by one of his bands, and have now witnessed what is a greatest hits of both. As they finish the final song, we applaud the man who had a hand in changing our lives in one way or another." Society Of Sound

"This reviewer could easily write about every song played - the show went for almost three hours - as they're all classics. To hear back to back greatest hits live of two of your favourite bands just never happens. Many went home tonight with a big grin on their faces." The Music

"Three sets and no support – no-one can accuse Hooky of short-changing the fans or not putting on a totally professional show. " Doubtful Sounds

"A brilliant night, a celebration of the music of Joy Division and New Order. That is Hooky's mission and this was easily mission accomplished."  Everything Flows


'A masterclass in euphoria and heartache in equal measure.... The chronology of the set played perfectly as high spirits continued to grow right up until the end of the show.” Gigwise


“It was certainly one of those special shows were the venue, artist, and fans all clicked perfectly to make for a very memorable experience and a blazing hot and awesome show by a legendary artist and performer, who in my opinion is the heart and soul of New Order keeping the most authentic live performance of their music alive for old and new fans.” Rock Subculture


“By focusing solely on the music, and allowing the songs inherent structure to do the heavy lifting instead of blowing them up into pseudo-stadium cuts, their inherent virtues were that much more apparent. Frankly, these songs rock.....This is Peter Hook and his band taking a chance, dusting off wrongly ignored tunes, and kicking ass. “Punk News