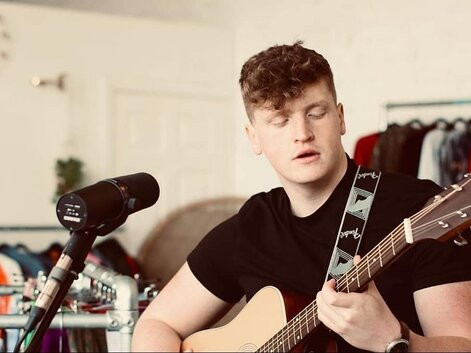 Emmo is an artist who defies genre, EMMO (pronounced Em-Mo) is a unique and intelligent singer-songwriter and multi-instrumentalist from Cork. His influences include Hozier, Phil Collins, Joni Mitchel and James Blake.

It's hard to exactly pinpoint where EMMO’s genre lies as his true songwriting ability often leads him to create incredibly different songs. Take "Calla Lily" for example - A song about a turbulent relationship that has a sonic blend of Vulfpeck and Ed Sheeran.

Whereas EMMO's Debut Single "Still" has an epic folk feel reminiscent of The Lumineers and Mumford & Sons.

His song "Uisce Beatha" - which could easily be mistaken as a Brian Deady or Nathaniel Rateliff track, was featured in an advertisement with a distinguished Irish whiskey brand.

Most Recently, EMMO was invited to perform at The German Songwriter Awards in Berlin as the judges wild card entry. His song "Little Bird" received critical acclaim from a panel of industry judges, including Universal Music & Sony Music, making it through to the semi-finals. As a result, EMMO was chosen as an Official Artist and Brand Ambassador for Ovation Guitars. EMMO currently performs on their 'Glen Campbell' model, from their 'Signature Collection’.


Last year saw him perform a series of sold-out headline shows in Winthrop Avenue and The Workmans Club. Not to mention selling out Whelans on the eve of Christmas Eve.

He recorded a solo performance for Cypress Avenue as part of their Winter Song series in January 2021. His performance appeared alongside Wild Youth, Gavin James and Lyra.

EMMO has also shared the stage with other Irish artists such as Stephanie Rainey & funk-pop sensations Toucan while also performing a series of gigs in New York and Luxembourg.

While EMMO is continuing to develop his sound from one song to the next he most certainly is not letting the constraints of being "Genre Specific" hinder his creative spirit, which makes him an exciting, unpredictable and fresh-sounding newcomer to the Irish Music scene.