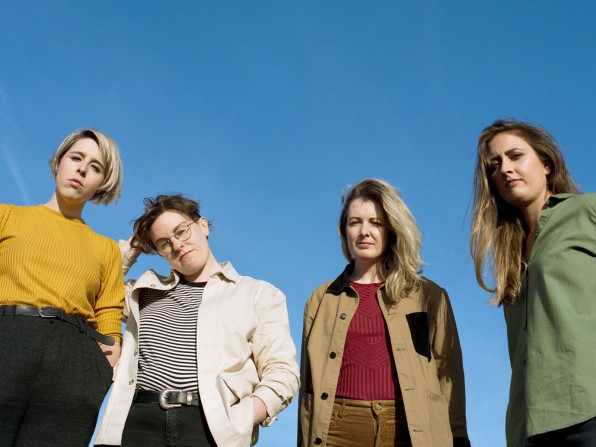 Queens formed in Winter 2016 with the immediate release of their demo EP Calm Girls, which Pillow sparked a successful string of UK & Irish dates & festival appearances.
Their second EP State of the State made its way onto BBC 6 Music’s playlists, with Steve Lamacq calling them “deceptively infectious, with sharp hooks and sharp nails”. The lead single Favourite picked up lots of great support on the UK’s national airwaves, including plays on BBC RADIO 1, BBC Introducing, RADIO X & Amazing Radio.
After two more UK tours, and two sellout hometown gigs, the band soon found themselves more and more comfortable on bigger stages, opening for the likes of American Football and Pussy Riot, capping off Summer 2018 with a stadium performance opening for Idles & Future Islands.

This quick momentum led to the band working with Mercury Prize nominated producer Tommy McLaughlin for their next single Gay Girls – which received a nomination for the RTE Choice Music Prize song of the year, as well as International airplay on NPR’s World Cafe & KEXP. 2019 saw Pillow Queens venture into mainland Europe, with an appearance at this year’s Eurosonic Festival, followed by an impressive string of European tour dates supporting Soak.
When Pillow Queens announced themselves in late 2019 with the soaring single "Brothers", their bruising interpretation of mourning for a lost loved one immediately caught widespread attention. Channeling wrought emotion through a sea of 90s grunge and indie-rock sounds, the Irish four-piece (from Dublin, Wicklow and Kildare) forge a powerful noise that is all their own – but meant for everyone. Pillow Queens offer a cathartic experience filled with camaraderie and solidarity
“bruised, stirring songcraft” - The Guardian, Ones To Watch 2020

“Pillow Queens know how to pull at your heartstrings.” - The FADER