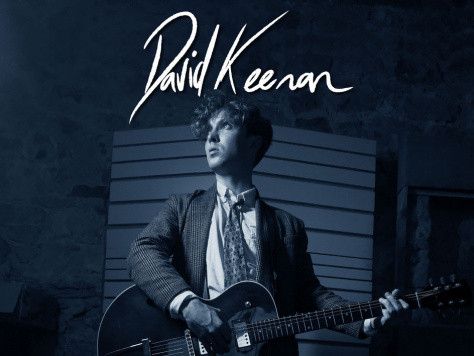 Each Ticket admits 4 per table

Table for sale only

Here’s to the fathers of the lost sons and the unholy ghosts. It’s the ones who seem
destined to get left behind interest me the most. I am the prodigal son, resting his
head on the drum that was carried through the welcoming parade. And I’d give all I
have, I would give all I have, strip me bare, let me wash in the rains.”
David Keenan – Unholy Ghosts

When David Keenan puts pen to paper, and then sets those words to music, the
everyday becomes the extraordinary. Take Barrack Street in his hometown of
Dundalk. It’s an unremarkable little place, rows of terraced houses lining either side.
Its pair of pubs have closed now, to be redeveloped into the inevitable flats. It’s the
kind of street where nothing ever happens.

But not in the imagination of David Keenan. His Barrack Street, he sings in Good Old
Days, is a place where the events of domestic life become a fairy story, “where the
sailors all come in to greet their families”, where people gather in “the picture house
where the navies and the banshees roam”. It’s a place, like his music, where past
and present and future come together in a reverie of truth, poetry and fantasy. If you
want your singer-songwriters to be relatable and blokey, David Keenan is not the
man for you. If you want them to have the epic sweep of Van Morrison, the high
notes of Tim Buckley, and the soul of Samuel Beckett, then he very much is. David
Keenan makes music that floats, where his words – not plain-spoken, but wandering
and questing – are woven into music that can be urgent or solemn or joyful as the
song demands.

“I've always understood that music, language, prose and poetry transcend modernity
or any kind of time,” Keenan says. “I don't attach myself to this period, or any past,
present or future. Through the relationship with art and language I grew closer to my
true self.” That true self is expressed on his remarkable debut album A Beginner’s
Guide to Bravery. “The album is an embodiment of all that. Just trying to, through
creative catharsis, self-educate and sculpt an inner world that become your outer
world.”

Maybe the story starts with the Hohner guitar, belonging to his uncle, that he found in
a wardrobe in his grandmother’s spare room as a child. And with the music his uncle
played to him – Leonard Cohen and Tim Buckley and Nick Cave and Dinosaur Jr. Or
maybe with his mother taking him across the border to the Ulster Folk Museum in
Northern Ireland when he was nine. “You know those little blue jotters you get in
school for words you don't understand? That was the first time I wrote in that. It was
of my own free will. Something happened then in that moment. I felt an element of
control, and the ability to sculpt with the imagination.”

he was already writing had to be better. But probably it starts with The La’s and
Liverpool and disappearing.

Nine years ago, when Keenan was 17 and on the dole after doing a computer
course, he packed up and left Dundalk and went to Liverpool. He disappeared – it
was two weeks before he went to a phone booth and called his mother and told her
he was alive and he was in Liverpool and she wasn’t to worry – and he was on the
trail of the disappeared. He had gone to Liverpool to find Lee Mavers, the elusive
singer of The La’s. “The La's opened up a new world of tuning your guitar to the hum
of an electric fridge. It was like holy music, holistic. I stumbled upon them. I found
this blog called Diaries of a Rock’n’Dole Star. That's all that I needed. This guy went
to Liverpool and spent his grant money on tracking down The Stairs and Shack. And
I had to go. I had never been out of Dundalk before. But I'd read all the books. I'd
read Kerouac and I needed to escape. Dundalk was grey brick upon grey brick. My
imagination needed to go and explore. So I got a one-way ticket on the ferry. I didn't
find Lee Mavers but I found some members of the band. I found Barry Sutton and
Cammy from the La’s, and I did support John Power eventually. But it was an
incredible experience. It broke down all the shyness barriers, because I had to play
to eat. I had to get £21 from busking every day to pay for the hostel in Edge Hill. If I
didn't get that I didn't have anywhere to sleep. I was busking. They kind of took me
in, and I ended up at the Lomax for the open night, which was where all the bands in
the 90s played, a place that never shut for denizens of the nocturnal world. It was
dreamlike, living off this pulse. This first place I ever felt safe was there.”

When he returned to Ireland, the newly confident Keenan began sending demos off,
and people began to take notice. Mick Flannery gave him support. Damien Dempsey
took him on tour. And he learned more about what kind of artist he was and who he
needed to be. “Looking at someone sing a song as if it's the last song they're going
to sing. That's what I get from Damian Dempsey or Jacques Brel. They're not fucking
cheating you out of anything. They're giving it to you as it is. It's life or death, you
know. Seeing things like that, it's like any artisan craft. You have to study it. It's a
discipline. You have to call yourself out on bullshit. Pull out the weeds all the time.”

There were other steps along the way, paving stones on which Keenan alighted and
where the light shone on him and more people noticed. The drunken incident in a
taxi in Dundalk in January 2015 – no, not that kind of incident – when he sang El
Paso for a local cabbie who liked to film his passengers, and the clip went viral. “I ran
away from this for a number of years, because I was running away from myself.
Totally lost, full of fear. I wrote that song when I was 15. I would have considered it,
at the time in my snobbery, a whimsical throwaway song. But now I'm proud of it. For
a 15-year-old to write it, it's decent. But that gave me a kick up the arse. Sometimes
having an opponent is good. It gave me the drive to bus up and down the country, do
as many open mics as I could, really work at my writing. And it got me gigs for a
while, as well. It sustained me for a few months. I played in Dundalk last Christmas. I
was playing James Dean, and there were these lads up front demanding El Paso,
and I was cursing them in my head: ‘You'll never get that!’ And something clicked.
And in surrendering to it I gained victory. I've been running away from this kid for

Finding his voice required more than just growing up, though. It needed him to
connect with the past, with traditions, with the people who haunted the bars of
Dundalk and with their stories. “There were all these characters who could hold a
room with a story or with aphorisms but would never write it down. I was enamoured
by all these wild characters. I'm from the border, where the air of suspicion given the
nature of the time, and then these wild people. That all bled into my songs.” The
stories of the past appear in them, snatched from the ether. In Good Old Days, he
sings the stories told by his grandmother, in moments of lucidity as she lived with
Alzheimer’s, about coal hidden beneath the cot so the glimmer man – the gas
inspector – wouldn’t find it, about the men cycling home in unison from the factories
at lunchtime,

All these threads are knitted together in A Beginner’s Guide to Bravery. Keenan’s
experiences feed into a record that is rich and ripe and romantic – not in the sense of
him being a lothario, but in his connections to the Romantics and their cherishing of
intense emotion and individualism; Wordsworth’s demand that poetry be “the
spontaneous overflow of powerful feelings" could have been written for Keenan.
Subliminal Dublinia came to him in Hollywood, on his knees in a hotel room,
despairing of his surroundings. Love in a Snug came after “I saved up for two weeks
to buy a suit when I was living with my grandfather. I got dressed up with nowhere to
go in my best clothes, and walked from one end of the town to the other. I ended up
on Barrack Street and there was a snug bar there, and the story just came, after
weeks of binge drinking.” He talks of Dundalk as a collection of sensory experiences
– the smell of Jeye’s cleaning fluid coal smoke and pork cooking at the salami
factory, and the sullen greys of the houses. And in his songs he adds to that the
world he has now experienced, and the changes he has undergone and the
characters he has met. And he and they fuse into the people who dance in and out
of his songs. “I get an image in my head of what their take on life is. What prejudices
they have, what cigarettes they smoke, what they're wearing. They create their own
mythologies, these characters. They're giving me clues. All the beautiful and
demented parts of my own psyche, the extremities of other peoples'. Everything is
absorbed and put into this petri dish and you watch it grow.”

A Beginner’s Guide to Bravery took just a week to record – five days in May, two in
August – at Hellfire Studio on the outskirts of Dublin, with Gavin Glass producing. A
week to record, perhaps, but there are lifetimes in it. And there are more lifetimes
being explored. Already, Keenan is playing new songs live – in front of huge
audiences supporting Hozier – and writing more in his notebook with the oxblood
leather binding, into which words pour every day. A Beginner’s Guide to Bravery is
brilliant, but its title is true. It is only a beginning. There’s so much more to come.